Can Karma Be Scientifically Explained? 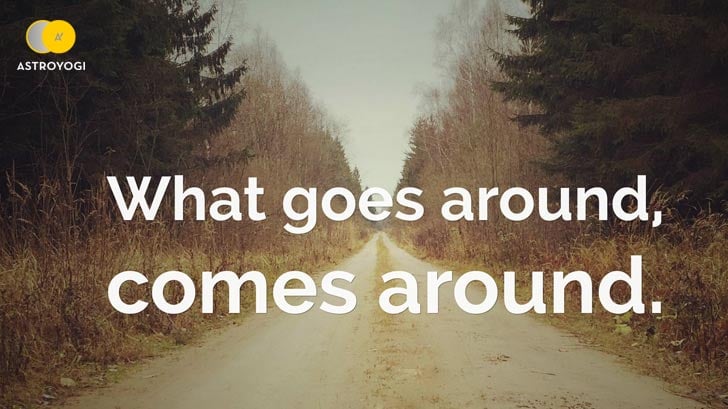 Karma. It is the sum of one's actions in his/her current and previous states of existence and viewed as a decision to their fate in the future existences. In this age of the computer and whatnot, Karma is definitely misunderstood. Some people used to label and talk about it as 'atmosphere' as well as assuming it to be the exact thing as human aura. You may have come across a bumper sticker while driving that states ''My Karma ran over your dogma''. Further, as meaningless the humour sounds, what does Karma really in fact mean?

- You reap what you sow.

- For every action, there is an equal and opposite reaction.

- What goes around comes around.

Find out what your karma holds from India’s best astrologers and tarot readers on Astroyogi.com. Click here to consult now!

As cliché as it may sound, these statements are daily phrases that can actually describe Karma. The word Karma is a Sanskrit word which means 'Act', 'Action' or 'Word'.  What the law of karma will teach is all of your thoughts, actions and words begin a chain of cause and effect. These experiences will be personally experienced with the effects of everything we cause to happen. The effect of the reversing karma may not be experienced the right way. However, Karma can be positive or negative. The beautiful fact of karma is that it applies anywhere to anyone.

Karma can also be considered as a boomerang's working. The energy that you throw out there is what returns to you. It is the greatest teacher we will ever get as it will make accountable for what we do and providing us with opportunities to learn from the mistakes we make and follow the corrective actions. With quantum mechanics, it can be found that the entire theory turns out to be statistical at best which means that the entire theory is based upon all the history and paths that it can integrate with over the possibilities and we can find the realities due to the theory of amplitude. It strictly abides by the laws of physics, that the events which can happen, will happen, according to the time which is required for the statistical waves to unfold themselves into real events regardless of whether the tangible events exist independently of the individual or not. In literal terms, Karma is the universal law or force which balances the good and bad effects in the world.

Most popular: 👉 Unboxing the Gift of Life | The Universe is Listening! | The Domino Effect

By keeping a sense of practicality, it means that if we get angry or frustrated or any sort of emotion, for instance, it sends out what is called as ripples - as ripples on a water body. We, humans, are in a constant state of sending out such ripples. However, the quality of the ripples sent out is entirely up to us - that is our choice. What we have to understand is that the ripples created cannot be changed, edited or removed. Once it is set in motion, we can only have the effect of the quality of the ripple. It is indeed realized that Karma is quite hard to explain but can be understood in simple terms as above.

Spirituality
Vedic astrology
How was your Experience