Did you know that when it comes to raising your vibration and being in tune with the rhythm of the universe, nothing is better than kindness. Genuine kindness isn't a well-thought-through donation to a good cause or support for a cause your friend is championing. It's in the everyday little things, the everyday little gestures. However, the problem is not that people are unkind; it's worse, they just don’t register some people's presence unless they are missing for any length of time.

Last week I went to Benaras and at the airport I found people rushing around, hustling bustling.... asking the porter to carry their heavy bags, the lady in the washrooms to give extra toilet roll.. no one said thank you. No one cared to even notice them if they didn't need to. Most people are like this. Eyes wide shut.

So when I hired a car to the Taj hotel where I was staying, I did what I always do. Started a conversation with the driver, because they often have the most interesting stories to tell. His name was Dharmender, kind of unruly and unkept, but so entertaining. He took me to Azamgarh and back at 2 in the morning, and looked after me like I was a younger sister. He shared how when he was in class 12, his brother had bought him a second half Scorpio which he drove around everywhere. His brother, who had pampered his brother and been the sole breadwinner with a small fan factory, had a heart attack when his factory burnt down. Dharmender became a driver, because that was the only skill he had, and he wanted to look after his old parents.

Ask yourself if you really see the people around you? The security guard, the lady who cleans the office washroom, the waiter at your favourite restaurant, the boy who comes to collect the garbage, do you ever ask them their story, because everyone has a story. Imagine what life might be like for them? Do you see them as a mother or father to someone? Do you see them as someone who has a dream? They are invisible to most.

Also Read: 👉 The Vibration of Attraction!

People will often yank out a tenner for the persistent beggar in the bazaar or at the traffic lights, feeling some sense of guilt at their ragged appearance, and we hurriedly carry on or ignore them depending on our benevolence on that particular day. But these other people, these people who do the tasks we would never do- the cleaning, the lifting, the toiling, the standing for 12 hours at length. Good, hard-working, earnest people struggling to make a living, to send their children to school, to get ahead in life.

Another unseen people are old people. We don't see them either. With the shaky knees and the slowness of movement..we fail to notice them, unless they are our own, often not even then. Over the weekend I was at a club with a few friends dancing and an old and frail couple was having dinner near the dance floor as retro numbers played in the background. As they were leaving our friend Vikram, an ex-army officer and very much a gentleman, smiled and started dancing with the old lady as she was moving slowly towards the door to leave. That moment captured my heart, as I saw her beaming with happiness as she put all her energy into whatever dance moves she could muster. He could have ignored her, and continued to be with us. But he didn’t.

Next time, take the time to observe those around you. Share a smile, say a few words to the security guard in your building, say thank you, or simply smile. Acknowledge or say something to these invisible people whenever you can, wherever you can. Let them know you see them, appreciate them and most importantly, if possible, ask them their name. Call them by their name.

Most popular: 👉 Unboxing the Gift of Life | The Universe is Listening! | The Domino Effect | Know The Secret of A Dream Come True?

These small actions are your karma points that collect over time. You don't do them for points. You do them because when you see people, you see an extension of yourself. You do it because your kindness is not reserved for the few.

You see another life with another destiny. Everyone around us is an extension of us. We are all connected. 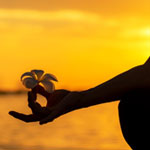 Mina Yogii is an inspirational speaker and writes a weekly blog, 'Yogii…A Little Bit of Magic,' showing people how to find their abundance and tread their life’s journey more gently. She enjoys helping people unfold their unlimited potential in a manner that is very simple to understand. You can share your feedback with her at mina@yogii.in. You can also follow Yogii on instagram.